Suddenly, Kiriukhina heard a whistling sound overhead. After glimpsing something out of the corner of her eye, she shouted for everyone to get down. The line was quickly drenched in blood, the air filled with screams.

Moscow had just launched one of its notorious 300mm Smerch cluster rockets — a projectile that unleashes 72 submunitions over an area the size of a football pitch — hitting Kiriukhina and her neighbors.

The torrent of shrapnel cut Kiriukhina’s leg, hand and forehead. A man nearby lost two of his fingers.

“I could feel that my leg and my hip got ruptured. My arm got hit and I couldn’t feel my head,” Kiriukhina told CNN.

The 56-year-old was taken to hospital in a wheel barrow and was hospitalized for ten days.

Video uploaded to social media showed a woman putting on a brave face as her leg bled out. A severed foot lay a couple of meters away. Another woman fashioned a tourniquet out of a dog collar — hopelessly — trying to save the injured woman, according to eyewitness testimony.

They were not the only Smerch rockets fired into Kharkiv over a key 48-hour period in late February, as Russian troops battled to seize the city from Ukrainian forces. And Ukraine is not the first battleground where Russian forces have deployed cluster munitions to devastating effect against civilians.
To survivors of Syria’s yearslong civil war, the scenes in Kharkiv echo countless others carried out by Russia after it intervened to aid President Bashar al-Assad in 2015.

Through analysis of satellite imagery in collaboration with the Centre for Information Resilience (CIR) and on-the-ground investigations, CNN has identified the rocket artillery brigade that launched the cluster munitions attack in residential districts of Ukraine’s second city on the day Kiriukhina and her neighbors were attacked. That brigade reports directly to same military leader — Colonel General Alexander Zhuravlyov — who oversaw one of the most brutal chapters of Syria’s war.

CNN traced 11 Smerch rockets that landed in Kharkiv on February 27 and February 28 back to Russia’s 79th Rocket Artillery Brigade, based in Russia’s Belgorod region.

CNN investigated attacks on Kharkiv on February 27-28 and confirmed that 11 locations were impacted by cluster munitions. The United Nations said at the end of March that there were at least two dozen cluster munition attacks on Ukraine since the start of the invasion. 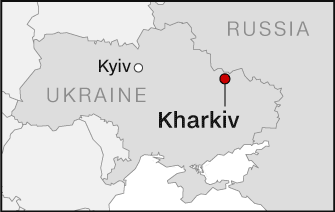 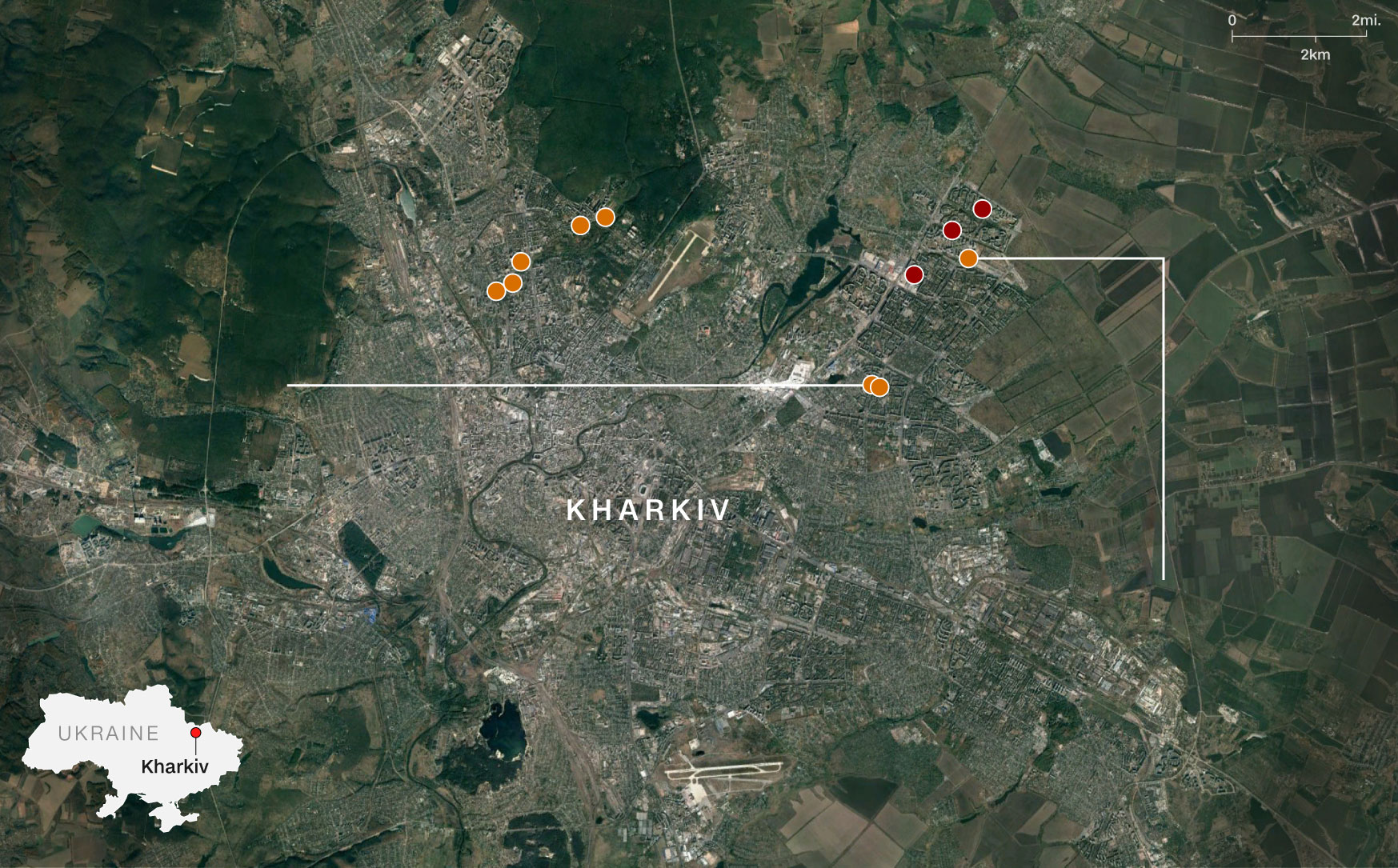 Video from Telegram. Verified by CNN 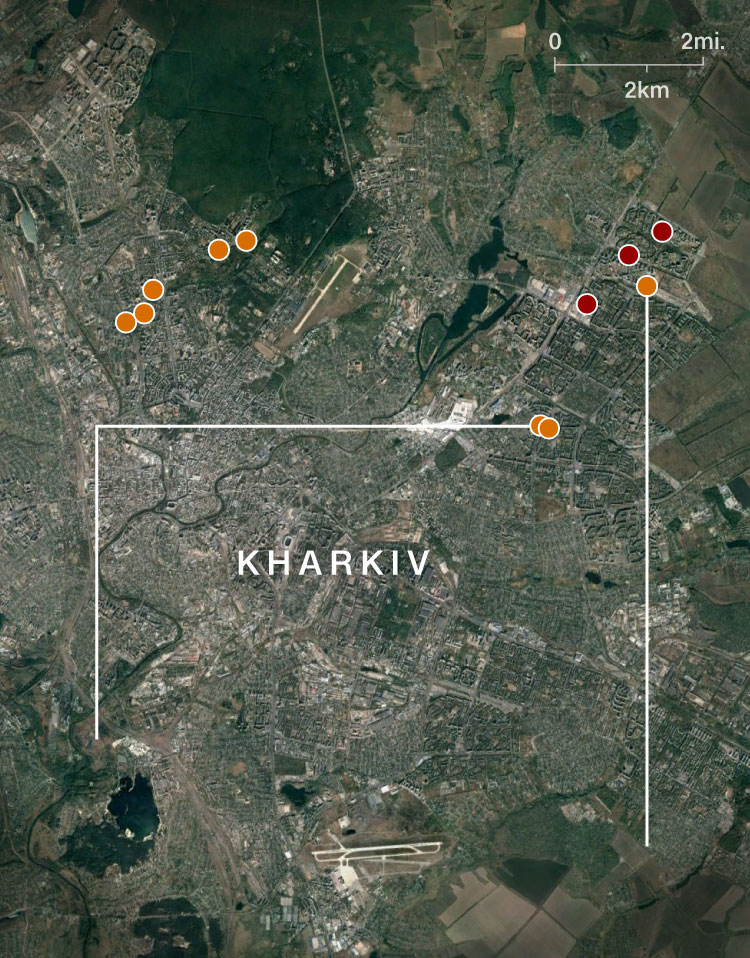 Multiple military experts told CNN that Zhuravlyov — the Russian equivalent of a theater commander in the US military — is the only officer with the authority to order a Smerch rocket attack in his district. As a high-value weapon, it needs senior sign-off.

The Kremlin and the Russian Ministry of Defense have not responded to CNN’s request for comment.

Zhuravlyov, 57, was commissioned as a Soviet officer in the 1980s when he served in the former Czechoslovakia with a group of Russian forces. After the USSR collapsed, he returned to Russia, initially serving with tank units.

Deployed to Syria three times, he first became the commander of Russian troops in the country during his second stint in July 2016. Before he assumed the post, Moscow was mired in a bloody fight to capture rebel-held eastern Aleppo, making steady advances against the armed opposition. 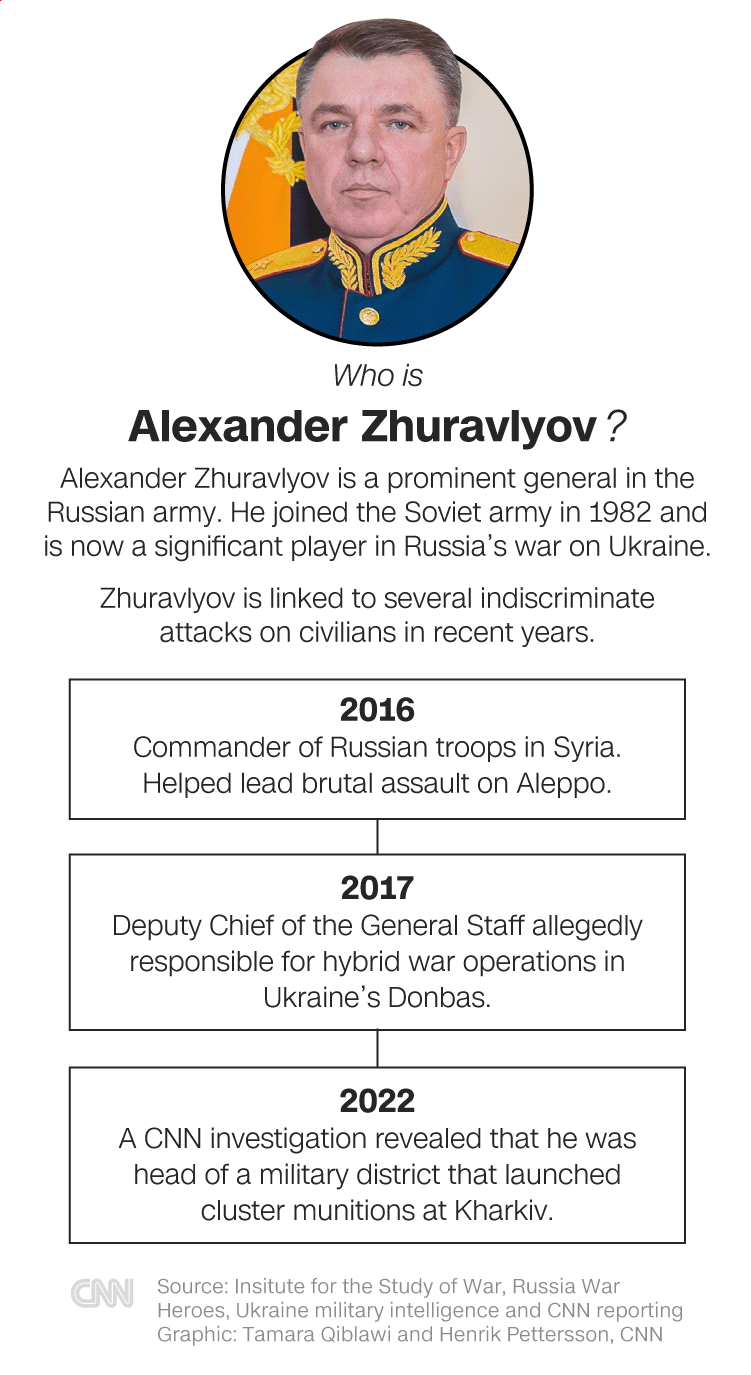 Zhuravlyov’s leadership catalyzed the assault on eastern Aleppo. After he took the reins, the Russian military rapidly ramped up its attacks on the rebel-held territory and completed the siege of the densely populated city, exacting a large death toll and setting the wheels in motion for a tactic that has defined Russia’s intervention in Syria: besiege, starve, bombard and grind into submission.

His period of command also saw a dramatic increase in documented cluster munition attacks in Aleppo.

According to the Violations Documentation Center, which documents human rights violations in Syria, cluster munitions were used 137 times in Aleppo between September 10 and October 10, 2016, a 791% increase on the average number of cluster munition attacks in the previous eight months.

It was an escalation which aid groups sought to draw the world’s attention to. At the time, Save the Children’s then-Syria director, Sonia Khush, said in a statement: “there are young children with freshly amputated limbs or with ball bearings embedded in their muscle tissue because of the use of these appalling and indiscriminate weapons.”

In Kharkiv, CNN spoke to dozens of eyewitnesses in several of the neighborhoods targeted by 11 Smerch rocket attacks that occurred on February 27 and 28.

CCTV footage shows Kharkiv residents fleeing for safety on February 28 as cluster munitions explode around them.
Credit: From Telegram, verified by CNN

They recalled the death and destruction that the cluster munitions wrought on their city. The streets were covered with wounded people, burning cars and broken glass. One eyewitness said that up to a dozen people were injured in his apartment building alone in a single Smerch rocket attack.

“I don’t know what exactly this was, but it was all over the district. These small bits that explode and spread dangerous shrapnel all over,” said Yuriy Braiko, an IT program analyst who lives in Kharkiv. “They create a lot of tiny shrapnel which gets into various places, windows and people.”

Rocket remnants seen in Kharkiv by CNN and the burn marks left by the projectiles revealed the incoming direction of the attack, which CNN traced back to Russia’s Belgorod region, near the border with Ukraine.

CNN visited a site where Ukrainian officials had collected large piles of exploded and unexploded ordnance. Mark Hiznay, a weapons expert and the associate arms director for Human Rights Watch, reviewed images from the site and said the photographs indicated that the cluster munition attacks had happened at a scale not seen in years.

“There are a lot of cluster munitions used in a scale that was probably beyond what we saw in south Lebanon in 2006,” Hiznay said, referring to the 2006 war between Lebanon and Israel, during which the Israeli military dropped an estimated 4 million submunitions on south Lebanon, according to the United Nations.

“It’s not like the movies where you see the missile before the bomb hits. You’ll just all of a sudden have 72 submunitions detonating across a football pitch,” said Hiznay. “So that’s why people are literally cut down in midstride from these things. You don’t have a lot of burns. You don’t have blast injuries. It’s just nasty, bloody fragmentation.”

What are cluster munitions?

Cluster munitions contain multiple explosives that are released over an area up to the size of several football fields. They can be dropped from a plane or launched from the ground or sea.

The submunitions are released in flight and fall to the ground. They can range from the tens to many hundreds

They are designed to explode on impact but as many as a third don’t, and remain a deadly risk to civilians for years to come

94% of recorded cluster bomb casualties are civilians, of which almost 40% are children

Note: Cluster munitions can vary widely in design and scale, this graphic only aims to explain their general function.

Cluster bombs are banned under an international treaty — the 2010 Convention on Cluster Munitions — that prohibits the use, transfer, production and stockpiling of the weapons. The treaty cites the failure of many submunitions to explode on impact, leaving dangerous ordnance in fields and urban areas that could kill or maim people. Russia, Ukraine, the United States and Israel are among the countries who are not signatories to the treaty.

But an attack of any kind that indiscriminately attacks civilians, as CNN’s on-the-ground investigation reveals happened on February 27 and 28, would appear to be a war crime, according to multiple experts interviewed.

“The extrajudicial murders and the bombardment of the civilian population, that is neither a military necessity nor proportional to the threat they are facing, are against the Geneva Conventions,” said Foreign Policy Research Institute fellow Philip Wasielewski.

“And based on the Geneva Conventions standard of command responsibility, General (Zhuravlyov) is culpable as well as anyone else in his chain of command.”

‘The wounds are the same’

A doctor who treated the war wounded in both conflicts has been struck by the similarities. People arrived at the Kharkiv hospital pockmarked with shrapnel, skin and muscle damage, amputations, open fractures and head trauma.

Syrian-American orthopedic surgeon Dr. Samer Attar, who worked in Aleppo as Zhuravlyov’s forces besieged the city, travelled to Ukraine from his hometown of Chicago hoping to help Ukrainian doctors cope with the unfamiliar tide of traumatized war-wounded.

Attar described the wounds he treated in Kharkiv and those he saw in Aleppo in 2016 as “the same.”

“You can hear the air-raid sirens but everyone here has learned to remain still and steadfast and carry on,” he said. “It never stops outside and neither does the work.”

In December 2016, the rebels who were holed up in eastern Aleppo finally surrendered and Syrian government and Russian forces recaptured the territory.

With the end of the battle for Aleppo, Zhuravlyov left the helm of the Russian military in Syria and returned to Russia. He was awarded the highest honors bestowed on a Russian officer — the Hero of the Russian Federation.

He was twice promoted the following year and became commander of the Western Military District — the same division that wreaked death and destruction on Kharkiv and other parts of Ukraine — shortly after his third stint in Syria in 2018.

“The results Zhuravlyov achieved in Syria were exactly what the Russians wanted, hence his reward with the top medal and the top postings one can get,” said Russian military expert Wasielewski. “It’s what Napoleon said: ‘a general’s reward is not a bigger tent but a bigger command.'”

Zhuravlyov later said in an interview that Syria had taught him about the value of “military ingenuity,” and that the lessons learned there were being integrated as an “organic component” of all Russian military training.

Another Russian general who served in Syria alongside Zhuravlyov — Lieutenant General Aleksei Zavizion — was appointed Zhuravlyov’s deputy in the Western Military District in the same month Zhuravlyov assumed his current position. Just a year before, Zavizion had allegedly led a group of separatist fighters after they wrested territory from Ukrainian government forces in the country’s eastern-most Donbas region, according to Ukraine’s military intelligence.

CNN cross-referenced its findings regarding the two Russian generals with Ukraine’s military intelligence who confirmed that they have accused the men of being responsible for apparent crimes against civilians in Kharkiv and elsewhere.

Neither Zhuravlyov nor Zavizion have been sanctioned by the international community.

“Colonel General Alexander Zhuravlyov should have been sanctioned for his actions in Syria,” a leading human rights lawyer at the law firm Payne Hicks Beach, Matthew Ingham, told CNN. “It is a shame that there was not a stronger response to alleged war crimes at that stage, because that may have affected Putin’s Ukrainian strategic calculations from the outset.”

Meanwhile, as Russia’s invasion continues into its third month and the offensive on the east of the country intensifies, bombs rain down on Kharkiv and much of the city has been hollowed out of its inhabitants.

The facades of many apartment buildings have been stripped off. Residents who remain have been driven underground to sprawling encampments in the city’s subway system.

Kharkiv in eastern Ukraine has been one of the hardest hit cities in Russia’s invasion of the country.
Credit: Alex Platt, CNN

After she recovered from the February 28 Smerch rocket attack, Kiriukhina fled Kharkiv, hoping to erase the “horror film” scenes from her mind.

Now when she’s out in public, she wears a beret to conceal the scars from her wounds.

“I was in a good mood. The weather was pleasant. The sun was shining. No one would have thought that such horror would swoop down in just seconds,” she said.

“From the bottom of our hearts and souls we wish for punishment for these crimes. Somehow justice will prevail. But probably not soon.”